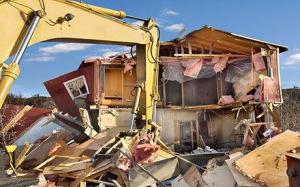 For Week 1 of the Extreme Writing Makeover, the key is to select a piece from your back catalog that needs to be gutted, demolished, torn apart, or otherwise razed to make way for the “new thing.” Once you’ve found your piece, state what it is in the comments section. This will help us hold each other accountable. If you’re willing, post your poem or your prose excerpt, too.

Mine is a poem I’ve had sitting around for nearly four years. I’ve sent it out to journals a few times as extra padding for the poems I really believed in, but that’s about it. And it’s also been included in a chapbook project called Suburban Hymnal which has since evolved into my first book manuscript, Praise Nothing. This poem has not made it into the book manuscript, and I’d like to change that, to give it a fighting chance for inclusion.

It’s a poem that came fairly quickly and easily but, as you know, “quickly and easily” don’t always mean “good,” am I right? Sure, the poem might have its moments. For example, I quite like the sounds of the first half of line 1, and I like the bridge in the second stanza as well as that stanza’s last line: “Dull as a penny—your listless face”—I think there’s maybe something worth pursuing there. The third stanza is lyrical enough, I guess. The poem on the whole follows a Greek lyric structure and it is, you know, a competent enough poem. But then again….

It’s not a poem that I really care about. I look at it and think, “Don’t just lie there saying nothing. Do something!” And that’s my goal for the next two weeks: to get in there and reanimate this poem, make it a whole new beast and one I can believe in.

What are your goals for the next two? What do you think will be the biggest impediments you’ll need to overcome during this process? What are your plans and where will you start?

In one week, on February 19, we’ll meet back here again to talk about how it’s going.

Looking Across Half-Moon Bay, Thinking of the Missouri

Tidewash skitters the plovers as though something

I could say might reach you in that place

where nothing can stand in for the waves.

from here on a bridge in Kansas City.

Dull as a penny—your listless face drifting beneath me.

How you pitied me then, said all meaning

of the sea. Listen. Even now I cannot say your name.