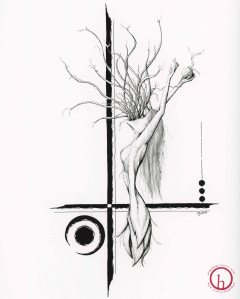 From issue 10.2, on shelves next week, is Katie Manning.

For the past three years, my primary writing project has been a collection of poems with the working title All That Remains. This project began because I was tired of people taking language from the Bible out of context and using it as a weapon against other people, so I decided to take language from the Bible out of context and create art. My process is to use the last chapter from a book of the Bible as a word bank and write a poem. As I’ve worked on this project, it has grown from being something born of frustration into something resembling lectio divina.

My research for this project led me to theopoetics. There are several strands of thought gathered under this umbrella; I especially appreciate L.B.C. Keefe-Perry’s overview in “Theopoetics: Process and Perspective.” Keefe-Perry considers the various theories involved, but states that theopoetics is ultimately “the study and practice of making God known through text,” and it is meant to be accessed by anyone (579). In reading other theopoetics texts by Stanley Hopper, Catherine Keller, David L. Miller, and Amos Wilder, I came to see how I was participating in theopoesis: making God known through poetry and also seeking to understand God as maker, artist, and poet. Amos Wilder’s foundational 1976 text, Theopoetic: Theology and the Religious Imagination, articulates the intended result of theopoesis: a move away from outdated language and tired metaphors, and a more vibrant Christian imagination that participates in the tradition of creatively seeking God rather than simply resting on the imaginative and linguistic work that has been done in the past. Wilder states, “Perhaps the greatest single contribution that a new theopoetics could make—whether for the liberal churches or for the Evangelicals, both alike limited by dated stereotypes, or for the many kinds of secular mystics—would be to repossess the mystery of the cross and its glory in a way that would speak to all” (12). Although Wilder’s words were published almost four decades ago, he speaks to our current moment. My theopoetics research has led me to a deeper understanding of my creative work and a clearer commitment to using imagination, fresh metaphors, and new language to help the church move from surface-level “Christianese” into more complex questions and understandings of the Gospel.