I’m sitting with the 4-year-old I nanny at his family’s dining room table. I have a piece of printer paper balanced on the illuminated screen of my phone and I am tracing an image of  Tinkerbell that I got from a Google Image search.

“You forgot her feet.” Benson comments.

“I didn’t forget them. I just ran out of paper. It’s okay that her feet aren’t in the picture,” I try to explain. “Not all pictures have feet in them.”

Benson is insistent. “But how will she stand on the pirate ship?”

I sigh and erase the bottoms of the legs that were leading off the paper, and taper the legs awkwardly into points. Now Tinkerbell doesn’t look like she has legs or feet. Benson seems satisfied. This is not the first time I have noticed that he and I have different ideas about art.

I slide the paper off of my phone and begin adding background embellishments in hopes that these will distract from the awkward legs. I write a quote from the movie in cursive along the long side of the paper, and begin to add a swath of stars to wind around the figure. This is good. The picture might still have a hope of looking like those Disney character drawings I see when I wander through Pinterest. Before I can finish the star banner, Benson interrupts me again.

“Why are you drawing that?”

“It’s the background. It looks pretty!”

“She doesn’t need a background. I’m going to cut her out and put her on my pirate ship!”

Reluctantly, I hand my attempt at a masterpiece over to the wrath of Benson’s scissors. What else can I do? It seems wrong somehow to fight with a four-year-old over artistic differences. 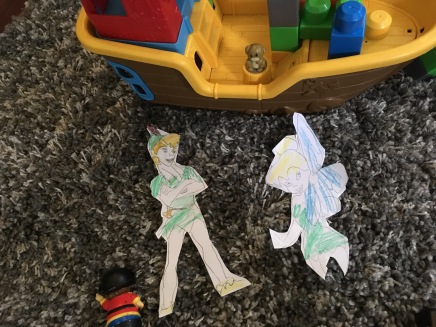 I’ve been doing a lot of babysitting and nannying recently with a number of different families. Invariably, this means I’ve been doing a lot of art projects, and most of those projects have been under close scrutiny. Adults seem much more willing than children to just accept the fact that I am not skilled at visual art. I’ve noticed, however, that children have definite ideas about what my drawings should look like, and they nearly always ask me to give up control and let them make the decisions. This is invariably frustrating to me, even though I know that no matter what I draw, the picture will just be crumpled up somewhere by the end of the day.

I’ve been wondering recently about artists who can give up control in this way, which has led me to think about a 1970’s art movement called “Environmental Art.” Environmental artists created works on an enormous scale, and released their creations to the influence of time and nature. Spiral Jetty in the Great Salt Lake is one that never fails to capture my imagination. Created by Robert Smithson, Spiral Jetty is a manmade shore of land that extends into the lake before curling back on itself, becoming a spiral. The water level of the Great Salt Lake is subject to extreme fluctuations because the lake has no natural outlets besides evaporation. Because of this, some time after the jetty was built, the lake level rose, and the jetty was submerged completely.

There’s a unique kind of beauty and loss manifest in pouring your time and energy into a thing and then releasing that thing to the ravages of what you can’t control. In the early 2000s, the lake receded again and the jetty re-emerged: intact, but changed by salt deposits from the lake. Smithson had died by the time the jetty surfaced, but I think he would have experienced great joy and wonder at seeing what the lake had wrought on his imagined landscape.

Environmental art can teach us that art always is, to some extent, a willing collaboration between ourselves and the environment that surrounds us. And yes, sometimes that environment includes assertive four-year-olds.

Lately I’ve been reading and thinking a lot about a branch of theological inquiry known as Theopoetics. One of the things that Theopoetics does well is to create a space for new articulations of God. While traditional theology can sometimes err on the side of trying to make everything fit neatly into familiar philosophical boxes, Theopoetics aims to look directly into the mystery of God and to leave space for wonder.

One Theopoetic thinker, Richard Kearney, writes about the necessity of what he calls “radical hospitality” in creating Theopoetic spaces. In his Theopoetics Primer, Way to Water, L. Callid Keefe-Perry writes, “[Kearney’s] call is one of invitation to walk in a place of hospitality and welcoming, even when the welcomed guest may prove hostile. Making the choice for faith may indeed be frightening and unpredictable, but hospitality may well call us to that.”

Spiral Jetty demonstrates a kind of implicit hospitality. Rather than trying to keep the environment out of his creative efforts, Smithson invited wind and sun and fluctuating lake levels to be a part of the creative picture. In doing this, he provides a unique opportunity for his viewers: inviting them to become participators, and to look directly into the mysteries that surround us.

I keep discovering that the road to God and the road to art intertwine more than I had ever expected them to. The more I try to pursue a creative life, the more I am discovering the necessity of a kind of hospitality to mystery and uncertainty. If I try to control all the factors of my creative expressions, the thing I create ends up being little more than a portrait of my own insecurities.

Jesus said “Blessed are the pure in heart, for they shall see God.” I wonder if such purity could be evident in simply welcoming the stranger: the foreign idea, the unknown person, the things outside of our control — even the child with strong artistic opinions. Perhaps one way of finding God in our own lives is by finding the beauty that arises when we give up our grand artistic visions and allow the intrusions of what is unfamiliar.

Hannah Cobb graduated from Whitworth University with a double major in English and Theology, as well as a minor in computer science. She is still trying to figure out what she wants to be when she grows up, but it will probably involve poetry in some way. In the meantime, she is working at a thrift store and nannying for two families. You can follow her on Twitter @HannahTheCobb.