In a small Virginia town I mistakenly make an illegal U-turn. A police officer immediately pulls me over. I immediately start crying. These are not crocodile tears; instead they flow from the mortification that I did something wrong and will have to (rightfully) face the consequences.

And yet, there are no consequences. I am a white woman crying in front of a white policeman who doesn’t even ask for my driver’s license. Instead, he waves me off and says, “Just be more careful out there, ya hear?”

Charles is a black man who is walking along a sidewalk in Miami. Without warning, two white policemen come up behind him and slam him against a wall. “Are you gonna be a problem?” one of the officers asks.

Even after they take their hands off Charles, they don’t excuse their physical violence; rather they try to defend it by saying Charles fits the description of a wanted black man.

Both of these stories are true. And what also is true is this: As a white woman, I have never once worried about police bullying. But as a black man, this wasn’t the first time Charles has been roughed up. And if things don’t change, it won’t be his last.

For years now I have heard variants of the pithy argument that if you don’t want to get in trouble, you shouldn’t do anything wrong. I did something wrong with my illegal U-turn, but I wasn’t issued a ticket. Instead, because of my privileged, white-woman status, I drove away free.

In contrast, Charles did nothing wrong. He was simply a black man walking down a street who was manhandled just because of his skin color.

I teach writing at John Jay College of Criminal Justice, part of the public City University of New York system. Because of the make up of our students, I am often the only white person in the classroom. And I am aware of my power—not just as a professor who evaluates student performance, but also as a privileged white woman who has not had to face the racial bias and abuse that, because of their diversity, my students experience almost daily.

And because of my privilege, I check in with myself daily—questioning if I have perpetrated even the slightest abuse of power in my classroom. While I acknowledge that I will never fully understand the inequalities my students must combat, I try to stand with them in solidarity and to reach toward them with empathy. 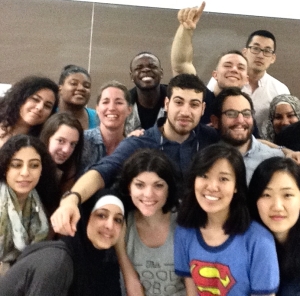 When my students are feeling powerless, I reassure them that—soon—the people-of-color minority will become the majority. I also explain that some in the current white majority are fearful of losing their social dominance, and that fear often manifests itself in violence.

Being verbally supportive of my students in a classroom where I have power is easy. But the question I keep asking myself is this: If I had been there—watching a white policeman use his knee to strangle George Floyd—would my love for that dying human have been compelling enough for me to take action? Would I have risked my own safety by using my white-woman privilege to try to stop the murder?

Sara Whitestone is a novelist-in-progress, an essayist-in-practice, and an un-tortured-poet-in-process. In exchange for writing instruction, her students at CUNY introduce her to the mysteries of the world. Whitestone has presented at Chautauqua, Johns Hopkins’ Conference on Craft, West Conn’s MFA residency, and other venues where external beauty and internal words merge. Her works have appeared in many print an online journals, including The Portland Review, Word Riot, and Literary Traveler. Whitestone’s current longform project is a novel titled Wandering. To learn more about her inner and outer adventures, visit sarawhitestone.com and follow her on Twitter and Instagram  @sarawhitestone.

One thought on “Being Wrong, Being Right, and Being a White Woman of Privilege”